In his role as chief of staff at Give Kids The World, John Flaschner oversees all operational departments at the Village – with primary responsibility for ensuring every department works collaboratively and effectively in creating magical experiences and unforgettable memories for wish families.

Prior to joining Give Kids The World, John spent 16 years as vice president of community outreach at the PGA TOUR. During his tenure at the TOUR, John launched and spearheaded a global military outreach initiative that has raised more than $30 million for military charities, and was named by the White House among the top 20 charities in the U.S. that support military families. He also oversaw the TOUR's global charitable initiatives; conceptualized a volunteer service excellence program with The Disney Institute encompassing more than 100,000 volunteers on the PGA TOUR, Korn Ferry Tour and PGA TOUR Champions; and championed the TOUR's outreach programs for women and families.

Previously he served as VP of global public relations and community outreach at American Golf before serving as executive director of the American Golf Foundation. He joined the golf industry after a successful career managing luxury hotel properties, including opening the world famous Kealani Suites Hotel on Maui. Among his many professional and philanthropic affiliations, John volunteered at Give Kids The World for 24 years; serves on the Board of Directors of the Jordan & Kyra Memorial Foundation and the HEAL Foundation; and contributes his time to many other nonprofit organizations.

A native of Buffalo, New York, John is a graduate of Ithaca College with degrees in Business Communications and Marketing. 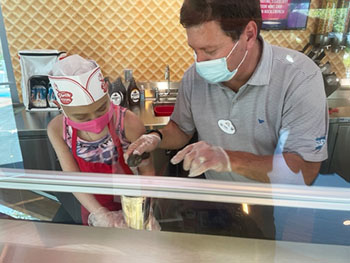