Steven Amos was born and raised in Sturgeon Bay, Wisconsin and is a proud fan of the Green Bay Packers. He has the cheesehead to prove it!

Steven graduated from Drake University in 2009 and relocated to Central Florida shortly after to further his career at the Walt Disney World Resort. Over the next 10 years, Steven held many roles from theme park operations to Disney Cruise Line marketing. He wrapped up his time at Disney with Yellow Shoes Marketing as a photography producer.

Steven began his career with Give Kids The World in December 2019 and has since taken the development team to new heights. From reigniting past events like Coasting for Kids to creating brand new events like Night of a Million Lights, Steven is passionate about raising awareness for our mission in new and creative ways.

In his spare time, Steven enjoys going on adventures with his wife, Lacee, and kids, Henry and Harper. 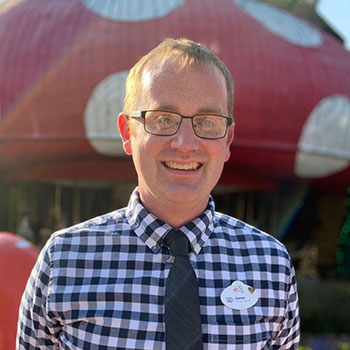