A Boy, A Wish and A Miracle: Walt Disney World Resort, Give Kids The World Village Deliver Holiday Magic 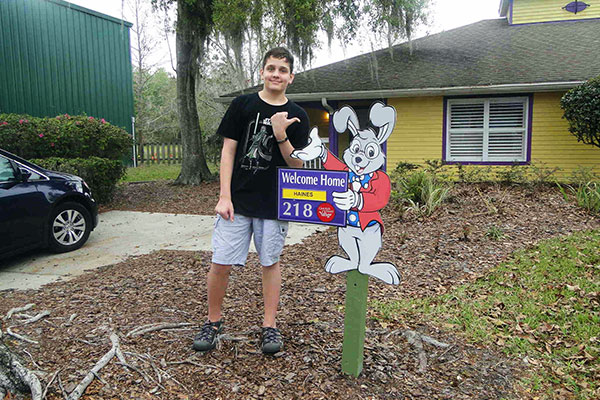 Walt Disney World Resort’s donation of more than three million sparkling lights will transform Give Kids The World Village in Kissimmee, Florida, into a bright and merry wonderland during Night of a Million Lights – a walk-through, socially distanced holiday light spectacular.  Debuting November 13 through January 3 at the whimsical non-profit resort that provides weeklong, cost-free wish vacations to critically ill children and their families, the event is much more than an imaginative pivot for the non-profit, which was forced to close to wish families temporarily in March due to the COVID-19 pandemic.  For one 15-year-old teen, it’s a magical homecoming.

One of only four people in the world to have been born with both Dravet Syndrome, a catastrophic form of epilepsy, and cortical dysplasia, an abnormality of the brain cortex, Gavin Haines has endured thousands of debilitating seizures beginning when he was six months old, causing severe developmental delays.  It took an unforgettable trip to Walt Disney World Resort at the age of six for the Star Wars super fan to speak his very first words.

Gavin’s seizures continued daily, upending every aspect of the family’s lives – until a visit this past March to Give Kids The World Village changed everything.  Endless doctor’s visits were replaced by precious time laughing, playing and celebrating together.  The Village’s delicious meals and signature “Ice Cream For Breakfast!” were a welcome respite from hospital food.  And to make the experience extra special, Walt Disney World Resort arranged for a memorable day at Star Wars Galaxy’s Edge.  Gavin’s smiles never stopped…but his seizures did!  Gavin has been seizure-free ever since, and his mother, Stacey Haines, credits the Village with Gavin’s miraculous improvement.

“Visiting Give Kids The World Village felt like coming home,” said Stacey Haines.  “Our stress just melted away; we were floored by the overwhelming support, love and compassion we were showered with, and it truly has been life-changing for Gavin and our entire family.”

The Village had such a profound impact on Gavin that in April, the Haines family packed up and moved from Connecticut to Central Florida so they can volunteer at the Village every week once it reopens.  However, they didn’t have to wait long to be welcomed “home” to the Village.  Upon hearing that Give Kids The World would be hosting Night of a Million lights to benefit future wish families, Gavin and Stacy Haines signed up to volunteer.

When the pair arrived to help string lights, Give Kids The World had a surprise in store.  They offered the family the opportunity to decorate the villa they had stayed in during their trip in March – which happened to be the very first family residential villa to be built at the resort – as part of the Night of a Million Lights installation, which is being made possible by Walt Disney World Resort’s donation of lights.  More than 45 partners including SeaWorld, LEGOLAND, the Kennedy Space Center, American Airlines, Hasbro, Chick-fil-A, IAAPA, Pepsi, Unilever, Margaritaville Hotels and Resorts, and the PGA TOUR will also be decorating one of the resort’s 166 family villas with their own unique designs.  In addition, Universal Orlando Resort will be decking out Marc’s Dino Putt mini golf course with holiday inclusive lighting and musical elements.

Tickets for Night of a Million Lights are on sale now at www.gktw.org/lights, giving visitors the chance to stroll among the dazzling light displays; ride the Village’s accessible attractions; and enjoy complimentary holiday treats.  Give Kids The World Village is located at 210 South Bass Road in Kissimmee, Florida. To learn more or inquire about volunteer opportunities, visit www.gktw.org.