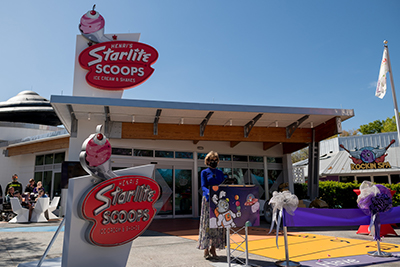 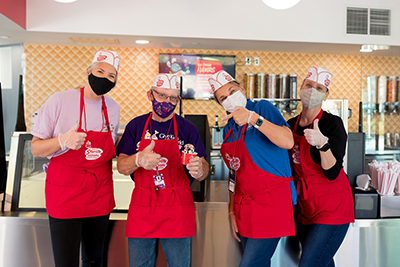 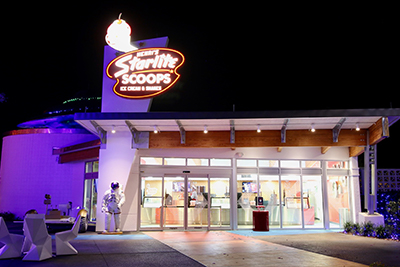 When Give Kids The World hosted the March 7 grand opening of its space-themed accessible ice cream parlor, Henri’s Starlite Scoops, it marked another remarkable milestone in the charity’s storied history.  For 35 years, the 89-acre, whimsical nonprofit resort has delivered happiness and hope to critically ill children and their families through weeklong, cost-free wish vacations. The new venue joins snoring trees, an enchanting castle, and the world’s largest game of Candy Land in a storybook wonderland unlike any place on earth – where the possibilities for fun and childlike wonder are as endless as the ice cream.

“Children with critical illnesses face countless appointments, treatments and hospital stays, and they are often told “no” due to the limitations of their illness. Unlimited ice cream is an important part of giving wish children and their families a week of “yes” where they can forget their worries, experience joy, and spend priceless time together,” said Give Kids The World President and CEO Pamela Landwirth. “We are grateful to the many treasured partners who have made it possible for us to continue our 35-year legacy of transforming lives one precious moment at a time.” Landwirth was joined by retired U.S. Navy Captain and former NASA astronaut Chris Ferguson, wish families, and VIPs at the grand opening celebration.

Designed by Walt Disney Imagineering in collaboration with Universal Creative, with support from community partners and individual donors, every aspect of Henri’s Starlite Scoops has been built with accessibility in mind.  Custom-built 28-inch tall ice cream chests in lieu of the traditional 34-inch cases make it possible for all children, including those in wheelchairs, to pick out their favorite flavors. Similarly, lower countertops, an accessible ice cream toppings bar and an open floorplan enable those in wheelchairs to easily navigate the venue and enjoy its immersive theming. Walls inside the rotunda feature false windows that offer a glimpse into space, as if guests are dining inside a 30-foot flying saucer, which sits atop the building. Historic photos and NASA memorabilia – including a space suit, moon rover, and a Give Kids The World flag which John Glenn took with him on a Space Shuttle Mission – complete the out-of-this-world venue, which pays tribute to the life and legacy of Give Kids The World founder
Henri Landwirth.

Born in Antwerp, Belgium, Landwirth survived five years in Nazi death and labor camps during World War II, including Auschwitz. After immigrating to the U.S. and serving in the Army during the Korean War, he began a 50-year career in the hotel industry, rising from bellman to owner. Most notably, he managed the Starlite Motel in Cocoa Beach, FL, which served as the temporary home to the original Mercury 7 astronauts – who became Landwirth’s lifelong friends. With their support, and through contributions from founding partners, Landwirth created Give Kids The World in 1986 to fulfill his long ago pledge to one day prevent other children from missing out on childhood as he had. Since then, more than 176,000 critically ill children and their families from all 50 states and 76 countries have been welcomed to Give Kids The World Village to laugh together, play together, and create unforgettable memories away from hospital stays and medical treatments.

Every child whose wish is fulfilled by Give Kids The World and his or her family receives an all-inclusive stay including transportation; accommodations; donated theme park tickets; all meals and snacks; nightly entertainment; daily gifts; unique interactive experiences at the Village, a magical accessible destination all its own; and of course, unlimited ice cream…including the Village’s favorite tradition of Ice Cream For Breakfast!

Rated Four Stars by Charity Navigator, with 90 cents of every dollar going to its mission, Give Kids The World Village is located at 210 S. Bass Road in Kissimmee, FL. For more information, please visit www.gktw.org.  A digital press kit for the grand opening, including images, can be found at www.gktw.org/35press.