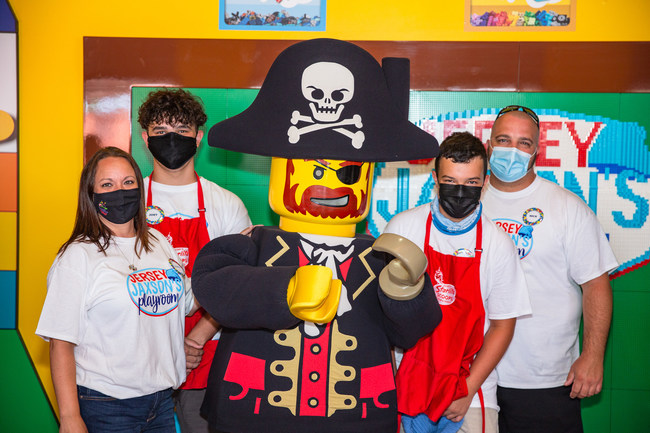 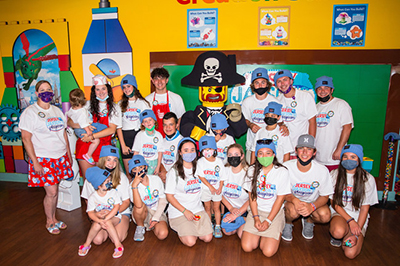 Six-year-old Jaxson Butkus brought joy into the lives of everyone he met during his short life.  And now, the venue named in his memory will continue to spread happiness and spark the imagination of wish children and their families from around the world.

In honor of Jaxson, the new Merlin’s Magic Space at Give Kids The World Village has been renamed Jersey Jaxson’s Playroom, a nod to Jaxson’s home state of New Jersey and his love for LEGO®.  The announcement was made during a special dedication ceremony attended by more than 40 family members as well as representatives from LEGOLAND®  Florida Resort and the Merlin’s Magic Wand Foundation, who collaborated to bring the uniquely themed, ADA-accessible LEGOLAND play space to Give Kids The World – an 89-acre, whimsical nonprofit resort in Kissimmee, FL, that provides critically ill children and their families with magical weeklong wish vacations at no cost.

“Jaxson captured our hearts and we are truly grateful for the generosity of Merlin’s Magic Wand Foundation and LEGOLAND for helping us honor his memory,” said Give Kids The World President and CEO Pamela Landwirth.  “Jersey Jaxson’s Playroom will bring joy to countless children for many years to come.”

In 2015, shortly after his first birthday, Jaxson was diagnosed with atypical teratoid rhabdoid tumor (ATRT), a rare, fast-growing cancerous brain tumor.  He endured brain surgery, extensive chemotherapy and focal radiation.  By August 2019, Jaxson appeared to be doing well, and looked forward to starting kindergarten.  A few months later, however, the tumor returned, leading to surgery, high-dose chemo, radiation and three rounds of stem cell transplant. In October 2020, Jaxson walked into the hospital for his final stem cell transplant.  A few days later, he stopped walking; the tumor had spread to his spinal cord. Due to swelling caused by the radiation, chemotherapy was no longer possible.

In February 2021, Jaxson and his family were welcomed to Give Kids The World Village on a rush wish with the support of the New Jersey-based Elle Foundation, a nonprofit dedicated to granting final wishes for children battling a recurrence of cancer.  Jaxson and his family enjoyed a memorable week visiting local theme parks and exploring the Village.  Even a mid-stay blood transfusion could not erase the infectious smile and loving spirit of the courageous young LEGO fan.  While Jaxson received treatment, brothers Dominick and Joey volunteered their time brightening the lives of other wish families by scooping ice cream in the Village’s accessible ice cream parlor, Henri’s Starlite Scoops.

By week’s end, Jaxson was hospitalized for the last time.  He passed away on February 28, 2021, surrounded by his large extended family, who traveled to Central Florida from across the country to spend Jaxson’s final hours with him.  The family returned to the Village this week to celebrate Jaxson’s life and dedicate Give Kids The World’s LEGO play space in his honor.  In a tribute to Jaxson’s love for wearing beanies, custom beanies were donated to all attendees by Love Your Melon, a nonprofit that provides hats to children battling cancer and raises funds for pediatric cancer research.

“We are grateful for the magical time we spent together at Give Kids The World Village,” said Diana Butkus. “Thanks to the Village and the Elle Foundation, we created priceless memories as a family and took comfort knowing that Jaxson’s last days were filled with joy, laughter and love.  The way the Give Kids The World staff took my older boys under their wings and helped them cope during this very difficult time made an indelible impression on them; I have no words for how much that meant to all of us.”

Rated Four Stars by Charity Navigator for 15 years in a row, Give Kids The World Village is located at 210 S. Bass Road in Kissimmee, FL.  Since 1986, more than 176,000 critically ill children and their families from all 50 states and 76 countries have been welcomed to the Village.  For more information, visit www.gktw.org.

Merlin's Magic Wand is a US-based children's foundation that offers magical experiences for children who need them most.  We work with families, guardians, non-profit organizations, hospitals, hospices, and orphanages to make these experiences possible. Serving as the official foundation of Merlin Entertainments in the United States, we administer three magical programs: Magical Days Out, which provides tickets and travel grants for children to enjoy a day at a Merlin attraction; Magic on Tour, which takes the magic of Merlin to children who are unable to visit a Merlin attraction in person; and Magical Spaces, where we create highly themed and interactive spaces in partnership with a local non-profit organizations.

2021 marks the Theme Park’s 10th birthday and a year of celebrations for LEGOLAND including a full lineup of events, new openings and an all-new show, Brickbeard’s Watersports Stunt Show, that features gravity-defying stunts including wakeboarding, barefoot skiing, and an all-new flyboard act above the legendary Lake Eloise. More information is available at www.LEGOLAND.com/Florida.