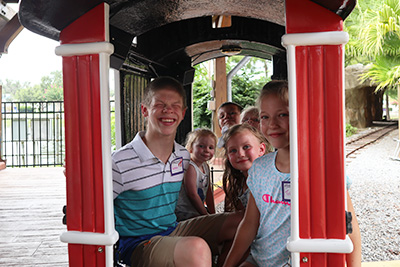 Underscoring the adage, “it takes a village,” a team of the world’s leading themed entertainment specialists have joined forces to transform the JJ’s Express train attraction at Give Kids The World Village into an immersive and engaging Jurassic-themed experience.  Officially opened on August 31, the ADA accessible Jurassic Junction (JJ’s) takes riders on a journey through a jungle, inside prehistoric caves and past paleontological dig sites.

JJ’s is one of four wheelchair accessible rides and attractions at Give Kids The World Village, an 89-acre, whimsical nonprofit resort in Central Florida that provides critically ill children and their families with magical weeklong wish vacations at no cost.

“We are grateful for the generosity of these tremendously talented creative partners,” said Give Kids The World President & CEO Pamela Landwirth.  “Their efforts will help us create priceless memories and joyful experiences for children and families facing unimaginable challenges.”

The team of 3D designers, sculptors, engineers, audiovisual designers, experiential storytellers and production specialists donated their services to the project, reimagining JJ’s into a paleontology-focused attraction complete with themed storytelling, new scenic elements and an upgraded train drive system.  Two new character voices, The Conductor and The Paleontologist, point out places of interest as the track traverses the Amberville section of the Village.

The project began when Crafted – a premier audiovisual design, show control and integration services provider for themed entertainment – approached Give Kids The World with the idea of adding an onboard audio system to the existing train.  Crafted then recruited Updike Creative to generate creative development and audio tracks.  Updike Creative subsequently came on board as creative director and project manager, and began assembling a powerhouse team of design and production talent to completely reimagine the train experience.  The result was a unique collaboration among gifted members of the Themed Entertainment Association and other industry professionals focused solely on creating an unforgettable experience for wish families during their stays at the Village.

Crafted installed a new audio system and took on the total replacement and upgrading of the train’s power system and controls.  Alcorn McBride supported the audio by contributing a RidePlayer.  Scenic, a world-class scenic contractor for global themed experiences, refurbished the entire train set and installed new awnings on passenger cars. Stefan Rules lent its expertise with story development, creative direction and graphic design, with Aye-Five Attractions & Entertainment Design adding creative and storytelling support.  Eric Williams Creative developed the overall styling and color palette for the refreshed train.  Color Reflections worked with Stefan Rules to produce all line art, graphics and lettering on the train and various station signage located at the attraction’s load platform.  TheStory LLC’s Bill Rogers, the voice of Disneyland, donated voice talent as The Conductor, with fellow voice actor Camille Dixon as The Paleontologist.  Pachinko Media then supervised, mixed and produced the overall music and vocal tracks for the new attraction, along with background music for the boarding area.  To enhance the project, Updike Creative added authentic century-old lanterns and equipment sourced from railroads around the country.  In addition, Arielle Rassel of Scenario teamed with artists Jen and John Yates of the Epbot blog to create wayside scenic painting.  The finished product is a beautiful and engaging Jurassic-themed attraction that is guaranteed to entertain and delight wish families for years to come.